Ross Bridge residents know that the Birmingham area is an ideal place to live. Being so close to Alabama’s largest city gives residents of local neighborhoods, such as Ross Bridge, the opportunity to explore numerous options for dining, shopping, recreation and entertainment. With all of these possibilities, it’s hard to not fall in love with the Birmingham area. And according to recently released data from the Birmingham Association of Realtors (BAR), more and more people have been discovering just how wonderful it really is to live in the Birmingham area, as home sales in 2013 increased an impressive 10% from 2012. 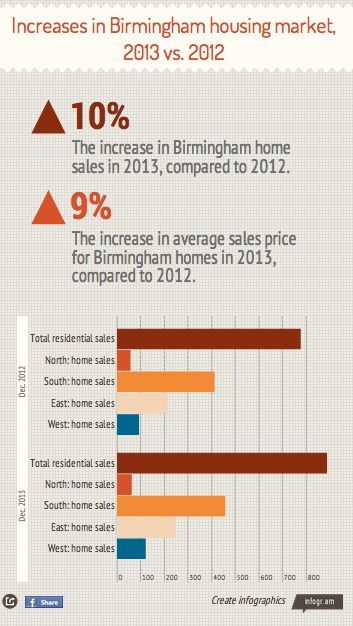 Additional good news is that the average sales price for homes in 2013 also jumped from 2012 – the average price of $198,144 in 2013 was 9 percent higher than the average price in 2012. This information is important because higher home sales and higher average sales prices are two key indicators of an improving and healthier housing market. The BAR analyzed data from four counties – Shelby, St. Clair, Blount and Jefferson, where our community of Ross Bridge resides.

The last month of the year was particularly exciting for the local housing market – according to the BAR, every geographic section of the area analyzed saw in an increase in December 2013 home sales when compared to Additional increases in the Birmingham area real estate market from December 2012 to December 2013 are the following:

·      Total residential sales increased 14 percent from December 2012 to December 2013 in the Birmingham area.

The release of all of this positive information is an excellent way to start off the new year, and it follows a year of great news in 2013 for the Birmingham area. Positive predictions for Birmingham’s future housing market came early in 2014, when al.com reported that the Birmingham-Hoover area appears to be the most likely to lead Alabama in its housing recovery, and with the abundance of good news about Birmingham’s housing market, it seems that this assessment certainly has merit.

Chip Watts, president of the BAR, said in a release that “now is the time to buy” in the Birmingham area, and at Ross Bridge, we couldn’t agree more. Birmingham is proving itself to be a leader in the state, and the increase in home sales clearly shows that more and more people are discovering what Ross Bridge residents already know – the Birmingham area is the perfect place to buy a new home.