One of the great parts about living in Ross Bridge is experiencing all of the best things about the city of Birmingham, but still living in a quaint suburban neighborhood. Ross Bridge already has the greatest amenities in the state, so we understand if you’ve never ventured out into the city. But with so much that Birmingham has to offer, it’s about time you went out and explored!

Recently, Birmingham received praise from Southern Living Magazine for their busy town and energetic communities. There is so much diversity in terms of music, food, fashion, people, and entertainment, that residents will never run out of fun things to do. The revitalized downtown has been drawing in visitors from all over and is even gaining national attention.

Birmingham a foodie’s dream come true. There is such a diverse food scene that no matter what you have a hankering for, you’re sure to find something tasty. There are international influences as well as traditional southern dishes with a modern twist. Most eateries focus on genuine flavor and authenticity, making for an unbelievable dining experience. 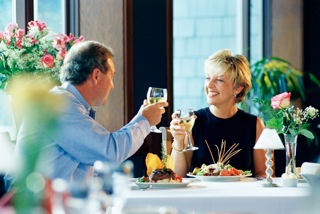 For those who are ready for a night out on the town, Birmingham delivers.  The night scene is lively, colorful, and impressive.  There is a medley of bars with all different styles – everything from Irish pubs to chic bars.  Also, because Birmingham has some of the most relaxed alcohol laws, there are plenty of breweries sprinkled throughout the city.

Music lovers will appreciate the buzz of the underground southern music scene in Birmingham.   Music has had a huge influence of Birmingham for many years, and some may deem the city as the South’s “best-kept music secret”.

Families with children also have plenty of things to do in Birmingham.  The Birmingham Zoo is always hosting events and family deals.  Or, maybe you want to explore a natural wonder?  Check out DeSoto Caverns, which is only 45 minutes outside of the city.  There are so many parks and attractions within the city; it’s a perfect field trip for people of all ages.

With a rich history and beautiful scenery, it’s no wonder everyone likes our city as much as we do.  As Birmingham continues to re-invent and revitalize, Ross Bridge residents get to benefit all of its great achievements.  Visit the article posted by Southern Living to view links and websites for the various Birmingham attractions.